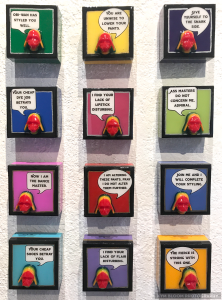 This is a series I created based on the fun notion of Darth Vadar being gay, which I think would be awesome. So much better than the whiny Anakin, eh? The inspiration for these pieces actually came from the silicone Darth Vader mold that I found (I bought a whole Star Wars set of molds to play with). I was pouring a mold for another project one day and had some tinted resin left over, which you can’t save. I think it was red. So, I decided to use the rest of it up and saw the Vader mold on my table and picked it. I decided just to fill the mold a little bit because I thought it would be fun to layer some colors and experiment with that. Then, over the next few days, I added the additional color layers and when the mold dried, boom, I had a rainbow Vader.

I’ve had a lot of fun making these pieces. I just wish Vader actually had more lines of dialogue because I think I’ve run out of quotes to play with. Enjoy!